The Tired Man was originally designed by Flemming Lassen for The Copenhagen Cabinetmakers Guild Competition in 1935. It is characterised by organic, bearlike shapes and then as now it created a sensation with its curved form and voluminous armrests. Sitting in the chair should, in Flemming Lassen’s own ords, be ”as warm and safe as a polar bear cub in the arms of its mother in the middle of the ice cap”. The family man Flemming Lassen valued intimate relationships - with its warm exterior, The Tired Man invokes domestic cosiness and socialising by candlelight. 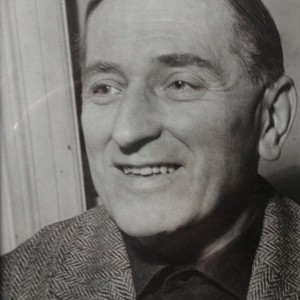 Established in Copenhagen in 2008, by Lassen celebrates and carries forward the legacy of renowned Danish architects and brothers, Flemming and Mogens Lassen. A renowned architect and designer, Flemming received many awards throughout his life.

He gained recognition early through his award-winning work with Arne Jacobsen. After meeting in school, the pair went on to work together and design the House of the Future, which established their careers in the world of design and architecture.

Following this, they also designed the Søllerød Town Hall including its interior, which was awarded the Wallpaper Design Award in 2012. Original designs from Flemming have become collector’s items with an original of The Tired Man holding the record for the most expensive chair sold at an auction in Denmark. Other designs include the recently released My Own Chair from 1938, brought to life again through by Lassen.